The Day Nepal Changed, I Changed By Sunee Maharjan

Sharmila “Sunee” Maharjan resides in Siddhipur, Lalitpur, Nepal and works as an accountant and supervisor of Zaplin Computer Systems. 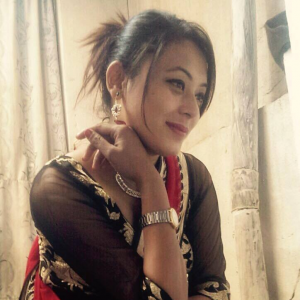 I am proud and feel good about growing up in Nepal as we are surrounded by natural beauties that you hardly have around the world. But, one day when you were happy with your life suddenly something happened.

On the 25th of April, 2015 nearly around 12 noon all of sudden the whole world started shaking and things started falling down right in front of your eyes, ohhh I just can’t forget the moment…

I just felt that nothing would be left as the ground was shaking for ages; people were shouting, running here and there… it felt like the end of the world, like the scene you had seen in movies. I just couldn’t figure out what was happening, for a moment I thought I was dreaming and next I felt it was real, for a while I didn’t know what I had to do. That was the time when I saw people around died in front of my eyes, trapped inside the rubbles and still we couldn’t do anything.

A lot of people were rushing here and there, some were searching if anybody was trapped in the rubble, some looking for their own family members. Because of frequent shake we were very afraid of staying indoors so almost everybody decided to stay outside. So we started making and managing the temporary tents from the things we had. The worst was when it started to rain in the middle of night, we didn’t have enough tents for everybody. Not only that, it rained so heavily that water started dipping from everywhere and the wind blew the tents away. It was almost impossible to find shelter.

In the middle of night again the ground shook then people ran outside. Slowly there was shortage of everything; especially the food. After a while, we decided to form a group to go rescue people around our village. We did whatever was possible like distributing water, calling out for people if anyone was inside the rubbles etc.

On 12th of May after two weeks when some people had gone home, at around 2pm there was the second strongest strike. More people were trapped and died, more buildings fell to the ground — it was the worst day of my life. We were forced to stay under the temporary tents like refugees or squatters. There is no word to express the moment.

This experience changed my thought regarding life. It seemed to be nothing, but that made me see life closely and it has taught the value of life and importance of togetherness.

One year later, we learned about what Thrive Project was going to do in our area and how they came to our village when we first met Brian, Ryan and their team. They told that they would give us training about solar power; how to connect the wires between battery and solar panel. I had only heard about the solar energy and used to think that only countries like China or India would be able to produce the energy out of solar and hadn’t thought that we (locals) would also be able to generate as we were.

I really didn’t have any ideas about electricity but this program helped me become interested in this field. Not only that, I was so happy that we could charge our mobile and light the bulb ourselves which I connected myself. We could do that though we didn’t have any ideas related to that field.

So far I haven’t decided about the exact thing I would do in future. Most probably I would be involved in social activities or social work. But I would definitely do something for the society and for the nation, if possible, regarding the things I have learnt through the training given by our encouraging and helpful friends; Brian Kam, Ryan Nicholas Brinkerhoff, Karma Wangyal and other friends about the solar energy.

I am very grateful towards Mr Brian, Ryan and their team for everything they have taught and done for us. They have given us a ray of hope to illuminate our city with the energy from the sun at the time of energy crisis.